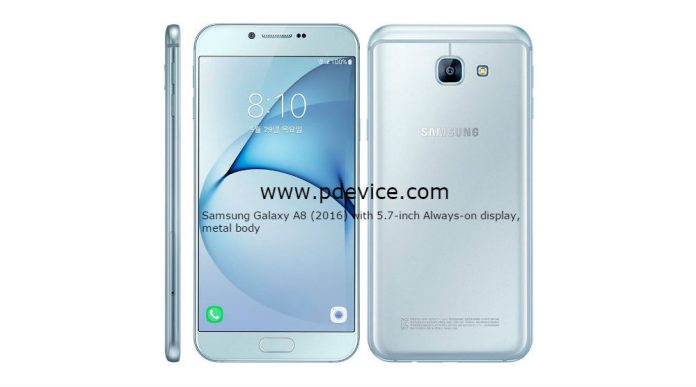 So far we have seen lots of rumors regarding Samsung Galaxy A8 (2016) which is also the successor of last year’s Galaxy A8. The device now officially launched in South Korea design wise the handset looks similar to its predecessor which also has metal body design but the Galaxy A8 (2016) comes with Always on Display which was Introduced by the company earlier this year with the Galaxy S7 series handset.

Specifications wise the handset comes with 5.7 inch Full HD (1080 x 1920 Pixels) Always on Super AMOLED Display and powered by Octa-Core (4×2.1GHz + 4×1.5GHz) 64-bit processor which is built on 14nm Exynos 7420 process technology along with ARM Mali-T760 GPU. Memory wise it has 3GB RAM, 32GB internal storage which can be further expandable up to 256GB with microSD card.

Handset available in Blue, Grey and Pink color options with a price tag of 649,000 won which is equivalent to USD $588 or INR 39,000 in South Korea and it will be available for pre-order from SK Telecom from October 1st.