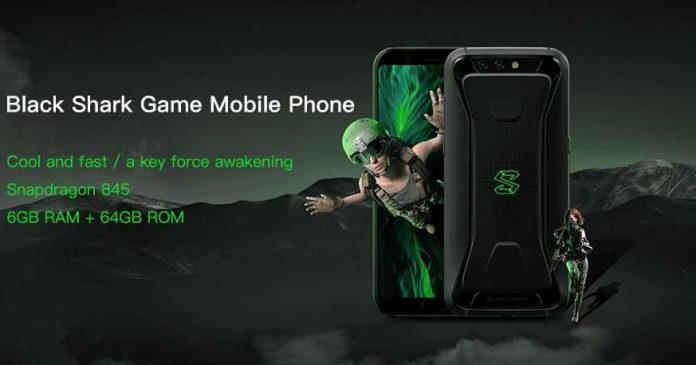 Xiaomi Black Shark amazingly designed phone with dual rear camera smartphone for $489.99 including worldwide free shipping, so enjoy the flash sale season, it’s for limited time frame, after that you will get the same phone without discount, as we know the phone was launched in April 2018 with high-end specs, with Black, Gray, and Royal Blue colors, the phone packed with a high-end RAM, battery and cameras, it’s lightweight and uniquely designed, as per current smartphone market info Xiaomi unveil so many new phones from past three months, now the latest Redmi 6 Pro also coming on June 25, While there is no official information about the global launch of the same variant as of now.

While there are so many other Xiaomi phone out there (on the GearBest website) with same price range, but this handset has their own identity such as unique back design, overall look, and few other features, the Xiaomi Black Sharke comes with a 5.99-inch, IPS, LCD with resolution of 2160 x 1080 pixels along with a screen-to-body ratio of 76.0 percent and looks very similar to rugged phones, but the Black Shark stands out with its unique front and back look and feel as looks so different, As the company announce Black shark was started shipping from April for the selected markets, but due to GearBest presence in the global market, we can order it even after it. The phone measures 6.36-inch length, 2.97-inch width, 0.37-inch thickness and weighs 190.00 grams.

There is no improvement on the battery & charging point of view, no wireless charging facility, the black shark powered by 4000mAh Lithium-ion battery with 9V/2A quick charge 3.0 support. Other than this the phone is powered by Octa-core 2.8GHz, Qualcomm SDM845 Snapdragon 845 chipset and Adreno 630 GPU, along with two RAM and storage options, 6GB RAM, 64GB ROM, and 8GB RAM, and 128GB ROM, which you can’t expand.