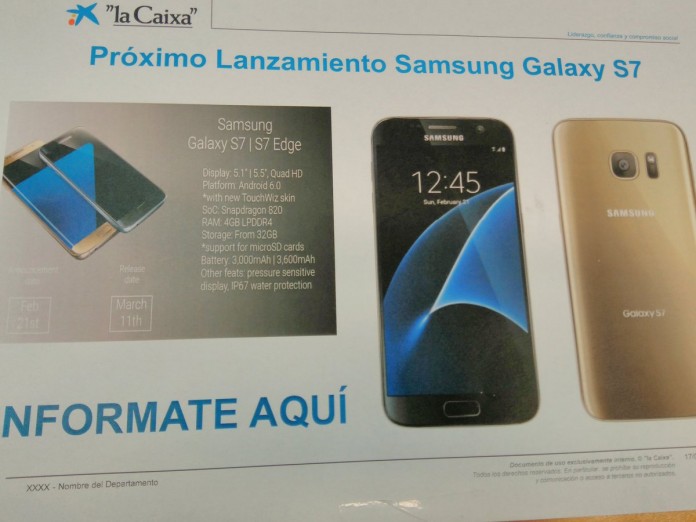 There is no day without having a new rumors and leaks about upcoming Galaxy Series Smartphone now a Spanish brochure spill the beans on the specification and release date for Samsung Galaxy S7 and S7 Edge high-end devices.Although this information is not official but we can see them as good as official announcement because the snapped photo of brochure gives us an idea about its release date and specifications.

According to the brochure image, the Samsung Galaxy S7 will sport a 5.1 inch Quad HD Display (1440×2560 pixels) resolution while the Samsung Galaxy S7 Edge is listed with 5.5 inches Quad HD display panel.Both supports QHD Super AMOLED display and both powered by Qualcomm Snapdragon 820 chipset along with 4GB of RAM and  32GB Internal storage and a microSD SD card for further memory expansion apart from that both will also include a pressure sensitive display, IP67 certification for waterproof feature and runs on Android 6.0 Marshmallow with new TouchWiz UI for better user experience.