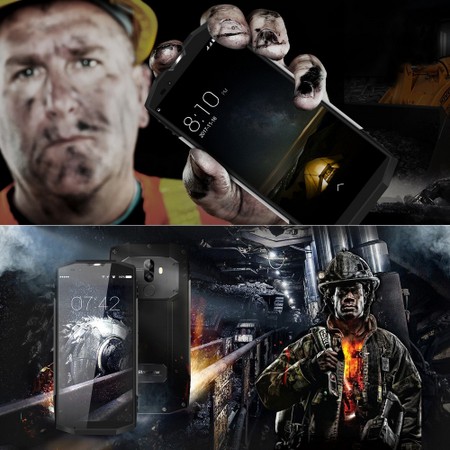 Let me Introduce you the first double Camera phone that is Water, Dust and Shockproof with an 18:9 Screen Ratio: BV9000 Pro by Blackview.

The company behind the Blackview smartphones is located in China, known as Shenzhen Doke Electronic Co., Ltd. It is actually a young company, founded in 2013 but believes the High-Quality Technology doesn’t need to cost a fortune.

Every product they make, from design to production have a strict examination process to promise only the best quality and experience!

The Blackview 9000 Pro, released at the end of November of 2017 is the follow-up of its 6 months earlier released flagship model named: BV 8000 pro. Even though there isn’t much time between both releases you can definitely say the upgrade is a big success considering the many additional features! 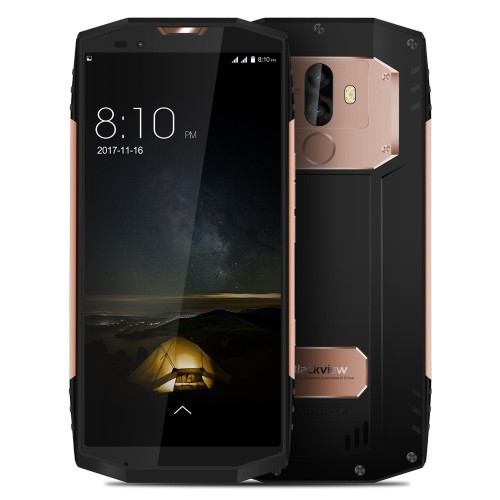 Rugged phones are made for those who work outside (Construction, Carriers, security) and/or Being adventurous ( Hiking, Biking, Climbing). This one is no exception. It is designed to survive intense environmental conditions. With a full aluminum-magnesium alloy and a screen-protecting edge on the front panel, the BV9000 Pro can take a beating and isn’t fragile like many phones nowadays. When falling out of pockets hands, tables or stairs should not harm the phone. It is built to survive! 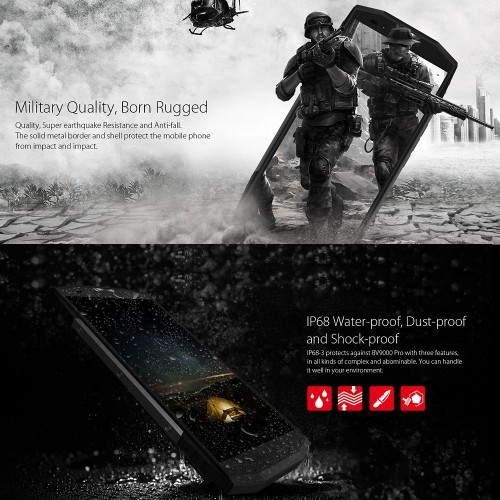 The BV9000 Pro is unique compared to other rugged smartphones due to the fact it has a screen size that follows the latest trend. It’s the first one with a screen size ratio of 18:6. The same screen ratio you can find on devices such as the Samsung S8. The resolution of its 5.7-inch screen comes in HD+ at 1440 x 720 Pixels. Keep in mind the screen is not as good as Samsung’s flagship but still, it is a good screen and pleasant for the eyes. Blackview upgraded their screen with a gorilla glass type 5 ( VB8000 pro used type 3). It is able to withstand Dust, dirt, sand and is still able to run smoothly after a half hour drive up to 150 cm depth in the water.

When comparing to the BV8000 Pro their many things changed, except for the Chipset and battery. As they both run on the same 2.6 Gigahertz MT6757cd (Shortly named Helio P25) processor you will not notice much difference. This MediaTek chip can be compared most to Qualcomm’s Snapdragon 625 which can be found in phones like the Xiaomi A1, HTC U11 Life and Motorola’s G5S +. Playing games on this device should not be giving any problem.

Unfortunately, it’s a little bit less efficient in battery use so to gain similar battery life phones containing the P25 needs a bigger battery capacity. Just like the BV8000 Pro, there is a 4180 mAh, the non-removable battery inside. You should be able to get 8-9 hours of screen time (which is a lot!)

When it comes to memory, the BV9000 Pro is a BEAST. It is packed with 6GB of RAM and 128GB of internal storage. Running big games or applications and capturing many pictures and/or videos is not a problem at all! 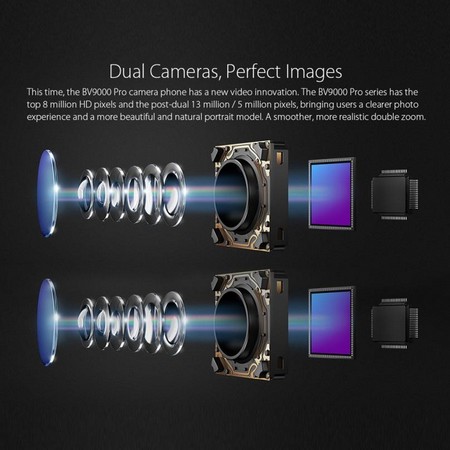 Another unique hardware feature that we haven’t seen on a rugged device before is the fact it got a DOUBLE camera setup on the back. A 13 + 5 Megapixel dual camera make decent pictures every day and at night. At the front, ou finds a Sony IMX 8 Megapixel camera for taking selfies.

The BV9000 Pro has a lot to offer when compared to other phones in the same price range. Where many phones remove sensors like NFC and a compass, Blackview kept them in! A compass combined with GPS gives you a better experience when using google maps while walking. It is more accurate compared to a phone with just a GPS sensor as it immediately knows which direction you heading out for.

The phone runs on Android 7.1 (Nougat) straight out of the box. There is a fast finger sensor for quick unlocking your phone. The phone can be unlocked with ‘face recognition id’ , it scans your face to unlock the phone.There is an FM radio receiver build in(not common nowadays). It features Dual Sim which means you can use two sim cards on one device. Last but not least the phone uses a micro USB to type C adapter to charge your phone.

Whenever you are looking for a rugged device with the latest trends this could be the ONE you need. Blackview made an excellent phone for people that want a sturdy device without losing a lot of “design”.

It doesn’t have a superb screen or a state of the art camera like a Samsung S8 but it’s good enough considering its price. At the end taking pictures is not the main reason getting this unbreakable BV9000 Pro.